I'm I techie interested in gadgets, downhill skiing, old-time radio and pinball. Much of this blog is dedicated to review of gadgets that I've purchased. I reside in the New York metro area with my wife and three kids.

About this blog
The postings on this site solely reflect the personal views of the author and do not necessarily represent the views, positions, strategies or opinions of IBM Corporation or IBM management. Entries are copyright (c) Chris Pepin, as of date of posting. Contents licensed under a Creative Commons License -- some rights reserved.

After trying several ski and snowboard apps for iPhone including SNOCRU and Ski Tracks, Slopes is my overwhelming favorite and I use it on my iPhone and Apple watch. I tested all three at local hill,
Thunder Ridge, and used Slopes during a three day trip to New Hampshire (Attitash, Wildcat and Cranmore) with my brother. Based on my positive experience, my brother installed Slopes as well and he's also a fan.

After installing the Slopes app on my iPhone, I clicked on "Record" and selected the ski area which was already repopulated since the app uses GPS. That's it. All my runs were recorded, distance, speed, time and more. I've included a brief video demo below.

As the New England Patriots gear up for the AFC Divisional Championship against the Denver Broncos later today, I wanted to focus on how the NFL is improving the fan experience in the stadium.

With large screen HD video in many living rooms and rising ticket prices, it has become even more challenging to attract fans to the stadium.  Technology is a key focus of NFL CIO Michelle McKenna-Doy and several stadiums are deploying in stadium wi-fi and deploying mobile applications with exclusive, in stadium content.

As a lifetime New England Patriots fan, I attended a game in Gillette Stadium earlier this year and experienced the enhancements first hand.  The free wi-fi coverage with excellent as was the Patriots Game Day app for iOS and Android which featured a number of unique features including:
Game-related news and updatesNotification on traffic, weather, parking, news and valuable promotions.Exclusive video including replays and RedZone.  I'm a huge fan of RedZone and watch it on m… 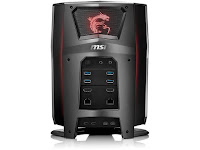 With my 4 year-old HP Envy desktop PC showing signs of failure, I took a proactive approach and bought a MSI Vortex G65VR-7RD gaming PC on sale for $899 (50% off) from Newegg which I award a "Thumbs Up." This PC is located in the family room and gets heavy use by all members of the family.

The MSI Vortex is small form factor desktop, similar to the Mac Pro "trashcan."  I like the look as well as the programable exterior LED's which can be disabled.  While a gaming PC wasn't a requirement, it is a nice to have, for my son who plays Overwatch. In addition, the high end specs should extend the useful life for a few years.